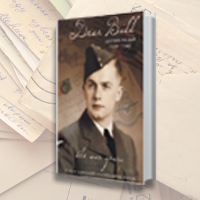 Due to complications with the presenters' health, this program has been postponed until further notice. Check back on our calendar or social media for updates. Apologies for the inconvenience.
Dear Bill is, in many ways, a time capsule that illuminates and brilliantly colours the years of 1939-1946 from a uniquely Canadian pioneer perspective. Bill Treadgold was a young man from Kelowna, BC commissioned into the RCAF; while his war efforts were confined to air forces bases in Western Canada, he was separated from his family and friends and maintained contact through letter writing. The letters he received in response to his own, form the rich memoir Dear Bill.While Dear Bill is a memoir from the war years, and brings to life Allied operations in Europe through letters from buddies who were commissioned overseas, it is, arguably, more so a memoir of battles on the home front, and of the triumphs of an incredibly resilient family.
Presented by authors Cathie Pavlik and Wendy Hamilton.
You can find the book here in our collection.
This program is both in-person and virtual. Health mandates are currently in effect. If you cannot follow them, we ask you attend online. Further information will be included in a confirmation email.

You must log in to register for this event.
Oops! - There was a problem in authenticating your card: